Being a new mom to a winter baby is so stressful. I have stressed about every cough and sneeze and have had extreme anxiety going to the store with a newborn just hoping he doesn’t catch something. I’ve spent so much time looking up symptoms to look out for and learning about illnesses that I’m still kind of mad at myself for not doing anything about Brayden’s cold sooner. This week we’ve spent time at the hospital due to Brayden having RSV and bronchiolitis. It was not the week we were expecting and it was definitely not easy watching our little guy suffer but he’s doing so much better now. I realized while we were in the hospital and telling friends and family what was going on that a lot of people didn’t know what RSV was or how severe it can be. Obviously people are not as paranoid as I am and didn’t spend hours researching like I had so I hope by sharing our experience it helps raise a little awareness and help other new moms know what to look out for.

Monday: Brayden got his 2 month shots and had mild congestion that his pediatrician said was from his reflux. He was prescribed Ranitidine and we were told to just use saline and suction for his nose.

Wednesday: Not showing a lot of symptoms except his congestion got a little worse at night. He did start puking a lot which his pediatrician said would happen from the shots.

Thursday: Worse congestion and a wet sounding cough. I was concerned about the cough but my husband thought it was just from his reflux so I thought I was just being slightly paranoid. The puking was more constant and mostly mucus which we weren’t sure was from his reflux or from his shots still so we didn’t think too much of it. He was a little fussy but not more than usual.

Friday: His cough worsened and my husband agreed we should call the pediatrician. His congestion was way worse and he was having a hard time breathing through his nose. The pediatrician told us it was most likely a cold and to keep doing everything we already were and if we were still worried, to call in the morning and make an appointment. He was pretty fussy throughout the day but still eating.

Saturday: His cough was still there so I called his doctor in the morning and we made an appointment. I noticed his nostrils flaring and told the person on the phone making the appointment, the nurse who took his vitals, and the doctor who examined him and none of them mentioned anything about it. They suctioned his nose and gave us some cough medicine and told us everything we were already doing was good and to just let the cold run it’s course. Almost as soon as we left he got worse. His eyes were very red and watery, he was fussy, and he was having trouble falling asleep for naps. That night he woke up every 2 hours or less (which is so unlike him) and I didn’t sleep because I knew something was wrong. I was listening to his breathing all night which was really rapid and he was waking himself from coughing or choking. 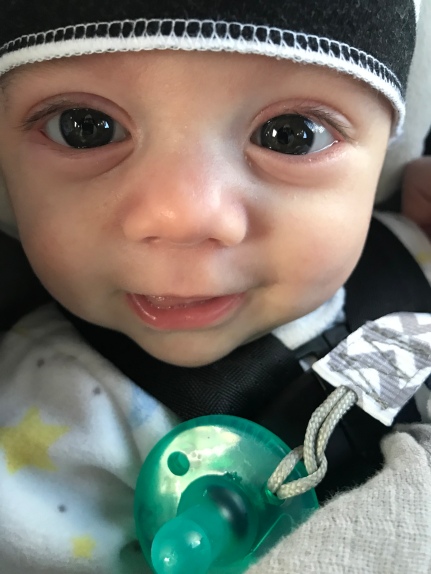 Sunday: He was very, very fussy and uncomfortable. He couldn’t nap and was letting a lot of milk from his bottles dribble down his chin because he couldn’t breathe while eating. He wasn’t really eating less but he was choking on the mucus and while suctioning out his nose, choked so bad he stopped breathing and my husband had to flip him over to get it out. I asked if we should take him to the ER but my husband said we would keep an eye on him. Brayden and I didn’t sleep much that night and I grew more concerned because his nose was still flaring and I noticed him slightly start to wheeze.

Monday: He wasn’t eating as much and was napping a lot during the day. He was not himself at all and I was taking videos of his breathing and wheezing and sending them to my mom and husband who both said it just sounded like his nose whistling. While changing his diaper I noticed his belly was retracting and his wheezing got worse throughout the day so I finally called his pediatrician again. They said it still was probably a cold but when I told her again that his nose was flaring she said we should bring him to the ER. Once we got there, the triage nurses immediately noticed his retractions and brought him to a closed off room instead of just a bed in the hallway of the ER since it was so packed. They said it looked like RSV and noticed he was dehydrated so they rushed to get an IV in him. He was too angry and squirmy and they couldn’t get a good vein in his hands or feet so decided it had to go in his head. Watching this was so, so heartbreaking. They ran blood work and nose swabbed him to see what he had and said it was RSV and bronchiolitis. They used a neo suction to clear out his nose because he was having trouble breathing and said we had to do a chest X-ray to see how much fluid was in his lungs. The X-ray was horrible because they had to put him in a little tube to make sure he stayed still so they got a clear image. I had to hold his arms over his head and I cried pretty much as hard as he did. They did a nebulizer treatment that they said wouldn’t do much but break up his mucus. Every nurse and doctor kept asking if he was full term because premies are more likely to get RSV and it’s a lot worse on them than it is full term babies. Then we had to be transferred to another hospital that had a pediatric unit so they could monitor him overnight because there was a chance he would stop breathing.

Once there, they agreed it was RSV and were concerned about his retractions so they started him on oxygen treatments and a monitor to keep track of his heartbeat and oxygen saturation. They wanted to keep him on it for a few hours because if he did well with it, we could be moved to the general pediatric floor but if it didn’t help, we’d have to go to the PICU. He seemed to improve a little so we were moved to the general floor. The pediatric wing was packed because so many kids are having respiratory illnesses and only had one recliner and the crib in our room. I hadn’t slept in 3 days so my husband told me to go home and sleep. It took a lot of fighting but finally I decided I couldn’t take care of him if I didn’t get some rest. Even though I knew he was in good hands and my husband was there, leaving was so hard and I had a meltdown when I got home from the stress of the last few days.

Tuesday: He slept a lot and was still eating okay and doing really well on the oxygen machine. They continued to use suction on his nose but started getting a lot of blood so they figured it was irritating him more than helping. By the afternoon, he started to wake up a little more and we got a few smiles so they turned down the level of his oxygen and said he might be able to be taken off of it tonight. About 20 minutes later, the nurse came in and said he could come off the machine. They still left his IV port in just incase he needed it but he was eating a lot better. His monitor fell off that afternoon and we told the nurse but she never came back to hook it up. Once shifts changed, the new nurse hooked him back up to the monitor and his oxygen saturation never dipped below 93%. They said RSV typically gets better around the 5th day and we most likely could be discharged the next day as long as everything was okay. That night, his personality came back and he was getting more playful. I went home again because I started feeling sick and my husband wanted to make sure I was getting enough rest. 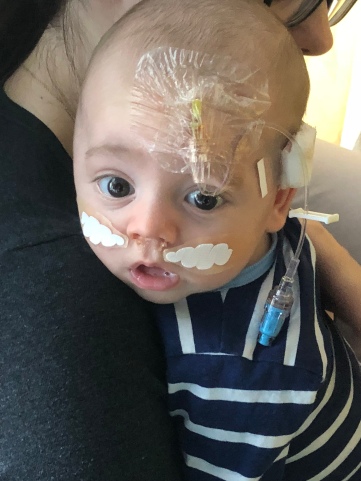 Wednesday: We were discharged early that morning! They told us to keep an eye on his breathing because it was still kind of labored. His cough was still there but they said it would probably stick around for about a month.

Friday: We had a follow up at his pediatrician who said his lungs were clear and he seemed to be doing really well.

I’m still so angry at myself for not listening to my gut and bringing him to the hospital earlier but, I’m happy that he’s doing so much better and that the RSV wasn’t more severe. It’s very common and the doctors said it could’ve been worse and we could have been in the hospital for longer. My mom got us the Owlet and I have been keeping a close eye on him because I never want to go through that again. I had many meltdowns and felt so helpless watching him go through everything but I’m so happy to be home and see him doing better.

View all posts by Kelly 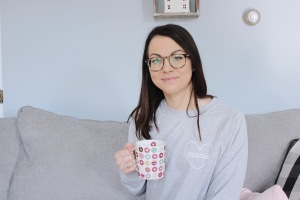